Mayan Soul Food & Mukbil Pollo: A Tamale To Die For . . . . In Isla Mujeres Where "Day of the Dead" Is Called Hanal Pixan & Lasts a Week

Hanal Pixan is usually translated as "food for the souls", and stems from ancient Mayan traditions that predate the arrival of the Spanish. It is observed more traditionally in rural pueblos than it is in urban areas.
In Isla Mujeres, families celebrate the holiday privately in their homes and at the cemeteries, and publicly in the plazas and at their family businesses. All around the Yucatan peninsula, you will see altars (ofrendas) in the airports and restaurants, as well as in homes, honoring the deceased (los difuntos) with 'offerings' of candles, foods, beverages, photographs and personal items. Tissue paper and marigolds (cempasúchil ) are used as decorations. Relatives are remembered in stories, songs, poems, and prayers, and their lives are celebrated with parades, dances, feasts, and contests.
There are concerns that Halloween is replacing this holiday.

The Hanal Pixan ceremonies combine Mayan and Christian elements, involving altars specifically designed to honor departed  family members, bringing relatives closer to each other and to their familial histories. If I were to compare it to an American holiday, I would say it is more similar to Thanksgiving or Veteran's Day, than to Halloween.  Some consider the departed to be attracted by the aromas, the candlelight, and the attention devoted to them. It is a time to celebrate their lives while strengthening bonds within families and communities.

November first is dedicated to the Angelitos, the souls of children, also called los Pixanitos. Their altars are filled with toys, candies, chocolates, pastries, and honey. There are seasonal fruits and vegetables topped with salt, lemon and chili. Favorite foods of the departed children are featured. Traditional toys, hand carved from wood, include tops (trompas), carts and "kimbombas",  a stick-bat with a peg-'ball', use to play a game similar to baseball.

At left are candies made by a local woman for this holiday from pumpkin, papaya, yucca, sweet potato, coconut, meringue,peanuts,marzipan and squash seeds; as well as sugary sculptures in the shapes of skulls, tombs, and monks.

Dia de los Muertos, the second of November, is dedicated to adults, the Pixano'ob, whose altars are adorned with their portraits, favorite foods, and may include cigarettes and alcohol.Water is always included for thirsty souls.

The primary dish related to Hanal Pixan is Muk-bil Pollo, which  means chicken cooked underground. Pollo means chicken, and "Muk" in Mayan means something buried. These over sized, baked tamales are made with chicken, stewed pork, and black beans, flavored with achiote & spices, wrapped in corn dough (masa) and banana leaves, then roasted in a pit. A cooking pit in Mayan is called a pib which is why dishes cooked by this method are called pibils, such as cochinita pibil.

The tamales are called pibis and this time of year is called the Season of the Pibis. In Isla Mujeres, this dish is also called "pibi pollo" and may include hard boiled egg. They are larger and weightier than ordinary tamales and may resemble a pan of cornbread with a filling, rather than your usual tubular tamale. Gringos sometime complain about the generous amount of masa.
You can buy them from the tamale sellers at the Magana ferry dock, and there are often vendors in the streets, plazas and markets, at the end of October and the first week of November. They might be on the specials boards at the cocina economicas and loncherias.

In Isla Mujeres, they are prepared in the pibil pits, as well as in the special ovens used for baking breads and pizzas.


Women from the countryside travel to Isla to earn money selling this traditional dish that is difficult to prepare. In the pueblos, preparations begin days in advance. The corn kernels are removed from the cobs and taken to be ground into masa, and the espelon (black) beans are shucked from their pods.
In Isla Mujeres, where there are no milpas, housewives purchase the masa and black beans. Lard is removed from the pork meat in advance and prepared with spices.The meats are stewed with oregano, garlic, onion, chiles, and epazote until the broth is concentrated. The meat broth is added to the masa until the correct consistency is achieved, with Achiote paste, pork lard, chiles, and spices, then diluted with oil to attain the correct texture. This mixture of masa, liquid, fat, and spices is called "kol".   While the kol is prepared by the most experienced cooks, families pitch in to clean the roasted banana leaves, knead the masa, and mold the chicken, pork, and beans.

Slices of tomato and onion are added with epazote leaves and covered with thick kol liquid. More of the masa dough is placed on top. The tamales are wrapped in banana leaf and tied, using the thick ribs of the leaves as string.

Meanwhile, the men gather wood and stones and prepare the pit and fire until the stones are hot as coals.The tamales, or pibis, are carefully placed into the pit or pib. A metal shield is added and covered with henequen sacks, then topped with dirt, until no smoke can escape. They are cooked for about two hours and the first pibis are placed on the altars. Families recite prayers and then enjoy this delightful dish with hot chocolate, atole nuevo, sacha, or balche. (Balche is an ancient Mayan drink made with tree bark and sacha is a white watery corn drink. Atole is a common Yucatan beverage made by toasting masa on a comal or griddle, and adding cinnamon tea sweetened with raw sugar. It may be flavored with vanilla or chocolate. Masa is made from dried corn that is ground while wet after being treated with mineral lime, and is also used to make tortillas.)
In Isla Mujeres, families file into the cemeteries to spend the night celebrating with their loved ones by grooming and decorating their graves, praying, lighting candles, while sharing memories and food. This is a private celebration by the community. There are public activities in the town square that tourists are encouraged to enjoy, including poetry, food, and an altar contest. Sometimes there is a small parade, and there may be a dance. Last year there was a "Catrina Contest" for girls that was a type of beauty contest. Bars sponsor Halloween parties with Dia de los Muertos decorations. Cultures traditionally blend together in Mexico.
On Hidalgo, the pedestrian street in Isla Mujeres, the kids practice a local version of  "Trick or Treat", which lasts several days, when they seem excited at the chance to participate in this American holiday for kids, featuring facepaint and freebies. Foreigners who are aware of this custom begin their evenings by stocking their pockets and purses with candy or small toys, sold cheaply in bulk bags at local groceries for pinatas. Regular visitors may bring toys from home, while many people hand out pesos or wave them away with an exchange of smiles.
Some foreigners are very vocal in their criticism of this blending of cultures, claiming it will lead to child beggars in the streets of Isla, displaying a lack of awareness about Mayan attitudes and culture; and forgetting that Halloween is celebrated as "Beggar's Night" in parts of the US, where we are delighted to see children at our doors "begging for candy". Islenos have politely asked me to help them understand this foreign custom where children go knocking on stranger's doors after dark, playfully threatening mischief if not given treats. Each year a few more kids ring our doorbell, often sporting minimal costuming with mixed attitudes of enthusiasm and uncertainty. Luchador masks, and skull face paint are popular with the boys, while the girls usually opt for something feminine. They are generally a small group, accompanied by an older relative.  Some expats and other foreigners enjoy donning costumes, having a go at  "Reverse Trick or Treating", then attending small Halloween parties in homes & businesses.

There is usually an Hanal Pixan celebration at the mainland area of Isla Mujeres that welcomes tourists. It is held at the ruin called El Meco with a candlelight ceremony performed by Mayan shamans, followed by women serving small pibes of Mucbil Pollo with hot chocolate to a crowd of about 200 people.
About a week later, families pray and feast in their homes again,  symbolically bidding their loved ones farewell. This second celebration is called "Bix".

Here is my post about Day of the Dead in Isla Mujeres (link) & Dead Bread, Catrinas, & Calaveras


As you enjoy this beautiful slideshow about Dia de los Muertos, you will notice that you probably understand most of the Spanish, since this professional video is designed as a diversion ('a flight of fancy') for a beginning Spanish class. 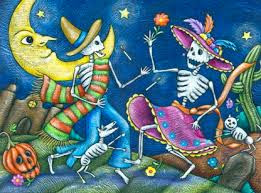